Harry Spencer·
All Articles
·9 years ago· 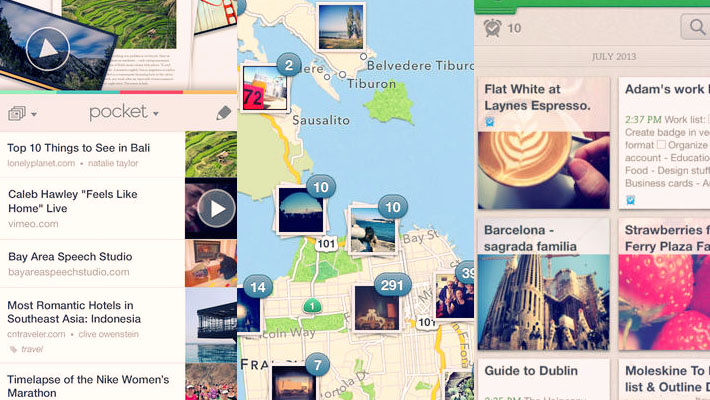 Home
All Articles
Smartest Apps For A Better iPhone 5 Experience

The iPhone 5’s larger display is great for users, but it poses a slight problem for app makers. They all have to reformat their apps to run on the new display. The good news is that a number of developers have revamped their apps to make them available for Apple’s new handsets. So, here we have listed some of the best apps for the iPhone 5.

Have you just got your new iPhone 5? Looking for the best iPhone 5 apps to get the ost out of your gadget? In that case, you are at the correct place. Just go through the following article to get a brief overview of some of the best apps for the iPhone 5. Pocket, formerly known as ‘Read It Later’ is a simple app that enables the user to save articles, videos, news or or something else over the internet, that they want for later viewing. The user can either bookmark a page or email the link to his personal account. The app interface is easy on the eyes and easy to use as well. It is a perfect choice for research, or internet surfing on-the-go. The app can even sync the saved files across many other devices so that the user may view them offline on any platform. The app has been honored as the App Store’s Best of 2012 and was featured by USA Today as ‘Essential App for Travel’.[divider_1px_bg] This one is a must have app for music lovers for music on-demand and music library management. It holds millions of songs for online and offline music streaming. The user can enjoy various radio stations, and save the songs he likes with a single tap. He can also browse, create and share playlists with friends and wirelessly sync the music to other Apple devices. The app also features up and coming artists’ songs so that the users can discover new music. [divider_1px_bg] Make the most of your iPhone 5’s bigger screen with this standout on-demand TV app. The BBC iPlayer is the perfect app to make the most of the bigger screen of the iPhone. It perfectly fills the iPhone 5’s widescreen with TV programs the users can enjoy live. This app requires internet connection, yet the user can add shows on his list to watch later. The latest update of the app has also improved its use of AirPlay adding a new button for video playback and easier streaming with an Apple TV or some other AirPlay device.[divider_1px_bg] The popular note-taking app has now got even better with the iOS 6 support in the iPhone 5. Now, it allows the user to share content over Facebook. The user can also add photos and web clippings and even record some audio to his notes. All those notes can be organized by having multiple notebooks. This smart digital notebook can be synced across multiple devices. The app has an amazing intuitive design for a better user experience.[divider_1px_bg] YouTube, the video streaming giant has given its app an all new makeover to its app so that it could fit in the  iOS 6 or iPhone 5. Now, the app features a better interface, improved searching function, integrated Google+ support and the ability to use voice search to help find the desired videos quicker than ever. This app enables the user to sign in his account and get the latest videos from his subscriptions, personalized recommendations, access various playlists, upload videos and share them with friends.[divider_1px_bg] This popular photo sharing app has also been optimized for iOS 6 and the iPhone 5. Now, the user gets the ability to peep full images on his iPhone without the need to scroll around. He can also see the Likes and Comments on the photos. Moreover, the upgrade brings along a helpful feature called ,Account recovery. In case, the user forgets his Instagram login info, he can use his Facebook account to reset his Instagram password.[divider_1px_bg] It is the best app for those who are obsessed with Twitter. This full-featured app allows the users to view multiple timelines such as their main timeline, a timeline where tweets use a specific hashtag and another timeline of tweets by a specific person. Swiping a tweet to right reveals a conversation and swiping to left displays other tweets related to it. Apart from multiple timelines, the app also offers smart gestures and customizable navigation.[divider_1px_bg] Those who find Apple maps a bit shaky and irritating, must get the Google Maps for their device. This app enables the user to view maps using Google local search, get voice-guided turn-by-turn directors and check out public transit directions. User can also get ratings and reviews of places in his locality, so that he could find a new restaurant or store in his area.[divider_1px_bg] It is a free and easier way to transfer or share content between the iPhone and other devices. With this app, the user can easily access important files anywhere with its cloud-storage service. He can save a file to the Dropbox folder on the computer and it’ll be available from the Dropbox iPhone app. The user can also automatically save photos and videos from the iPhone to his Dropbox account to access them from other devices. The app offers 2GB of space for free or just for signing up. The user can get up to 3GB of additional space by automatically saving photos and videos to Dropbox.[divider_1px_bg] The intuitive controls and superb graphics make FIFA 13 is a must have sports game for the iPhone 5’s display. The user gets the chance to play as one of the 500 real teams and choose from four different game modes. A new skill move button allows playing cool tricks with a swipe. The app has an ability to share goals and outlandish Cruyff turns via YouTube. It also enables the user to save games in Manager and tournament mode in the iCloud and continue the game on another iOS device. Now, the players will also be able to challenge the online friends.[divider_1px_bg] This game shows the journey of Siris, who is searching for the secrets of the Infinity Blade. The player has to help Siris unlock mysteries in the swordplay adventure while exploring exotic locations like the Asian-themed Saydhi’s Estate. There are numerous weapons, armor and spells to choose from. The ClashMob feature allows the player to earn rewards by participating in challenges. This features requires the user to log in his Facebook account.[divider_1px_bg]

Your IP is Leaked: How a VPN Can Keep You Safe

All these apps can be downloaded from the iTunes store. So get these amazing apps to get the most out of your iPhone 5. Many other nice iPhone apps are also available at the app store. What do you think about these apps? Do you have any better suggestions. Just share your views and let us know.