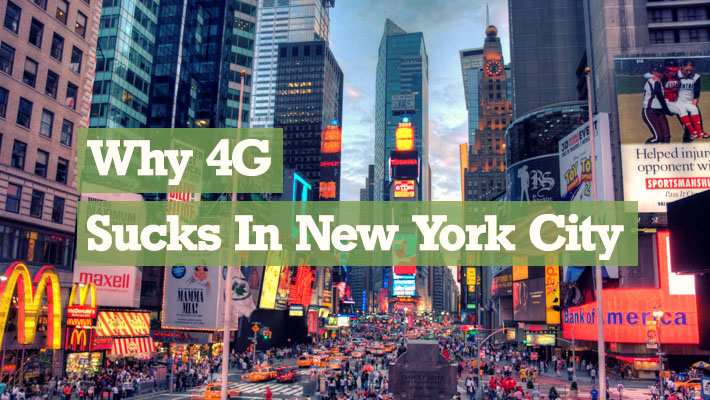 Home
All Articles
Why 4G Sucks In New York City

As most New Yorkers will tell you, 4G in the city is awful , especially in Manhattan. The Internet takes forever to load, your smartphone constantly searching for signal, and if you accidently move two spaces to the left, the video you’re trying to stream is now frozen. 4G and 4G LTE, wireless Internet access which is supposedly faster than normal home broadband, is typically spotty and unreliable in the New York City. Plenty of times we have felt like taking our phones and bashing it against the wall. Only some common logic prevents us from doing so. If 4Gs main purpose is to supply faster internet connections, then why is it so slow?

Compared to other cities, 4G runs slowest in New York. Take, for example, the average download speed for AT&T 4G customers. In Boston its 16.57 Mbps and 10.26 Mbps in Miami. It was only 3.77 Mbps in New York, nearly 80% slower. Comparably, T-Mobile’s 4G network runs 1 Mbps below average speed while Sprint and Verizon’s 4G networks run above normal when compared to 7 other East Coast cities (full chart).

Why Your 4G Blows

Network congestion is the main cause of spotty 4G reception in Manhattan. In a city with 8.2 million people that stretches 13.4 miles, too many people are trying to access the web at the same time, admits both AT&T and Verizon tech support. This can seriously disrupt your Breaking Bad binges. Recall the AT&T incident of 2010, because the carrier had sold too many iPhones, its 3G network was unable to support such a high volume of users with their limited cell towers. This in turn created major network congestion. AT&T however has since cleaned up its act.

The city skyline is beautiful and clearly warrants bragging rights for those who live in and near New York City. However, such beauty comes at a cost. New Yorkers, and pushy tourists, face too much signal obstruction. Skyscrapers, brownstones, and brick buildings block adequate 4G signal, according to AT&T tech support. Isn’t it pretty obvious that 4G is typically strained when the Chrysler building is staring you in the face?

Who Wins the Race

Verizon customers enjoy the highest download and upload speeds than any other leading smartphone provider in the New York City area. This is in part because the carrier has erected multiple 4G LTE cell towers in the New York area. However, service tends to dwindle once its customers leave 4G LTE highlighted areas. AT&T makes up for where Verizon fails. According to CNN Money, AT&T users are the most satisfied with their 4G service. AT&T and T-Mobile, which is just beginning to implement its new LTE network, runs HSPA+, an operating system which enables 4G because it evolved from 3G. This means that HSPA+ users can access 4G in 3G and non 4G LTE areas. Unfortunately, Sprint users have been handed the short end of the stick.  Its 4G network has consistently ranked behind AT&T, Verizon, and T-Mobile in download and upload speeds (only 3.30 Mbps for download speed in New York City). Lack of LTE cell towers in Manhattan does not make Sprint an attractive 4G carrier. Who’s ready for the switch?