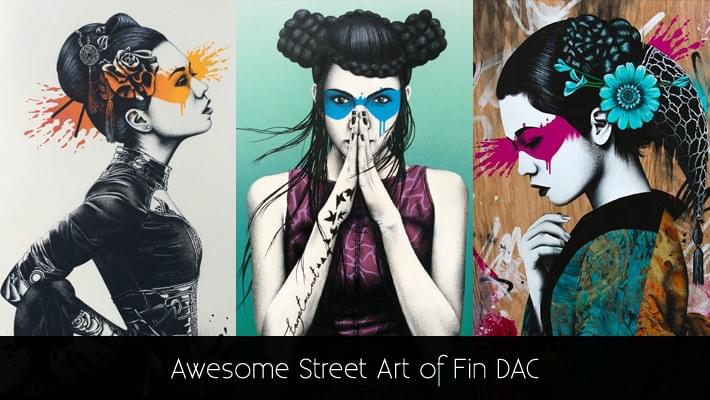 We’ll share awesome street art of Fin DAC who is a brilliant and creative artist.  His thought can be read via this quote, “Inspiration is a gift from the universe, talent is an ability to bring it to fruition and humility is what you should achieve when you share it”.

Fin DAC is an urban art career self-taught and non-traditional artist. DAC stands for Dragon Armoury Creative aka Finbarr Notte. He is from Ireland but recently living in Dublin. Fin DAC is an urban artist and Creator of Urban Aesthetics. He is Artistic Director at urban/digital art brand Beautiful Crime as well. “In a relatively short urban art career, I have defined and perfected an atypical paint/stencil style that ignores the accepted visual language of street art almost completely – I call it Urban Aesthetics (a modern-day take on a 19th century art movement)”. He says. “Hailing from Cork (Eire), I have lived the majority of my life in and around London. Self-taught and non-conformist, my influences range from dark graphic novels through to the works of Francis Bacon and Aubrey Beardsley”. Says Fin.

The most interesting thing is, all girls portrayed for street art played vital role in his artistic journey as all girls are real who came from different countries and places to be part of his work. He found some girls whereas some came to him. Another attention-grabbing thing is splash on each portraits’ eyes that give impression of clandestine. I love the way he thinks about work, commitment, progress and journey of life. He believes to make mistakes and do it again and again until it become better. “Still to this day I think I can get better and I’m sure I can and will”. Fin says.

He has painted along with valued artist like Nick Walker, Jamie Reid, Jef Aerosol and Goldie. His commercial work contains commissions for The Royal Albert Hall, G-Star, Armani, London 2012 and Jägermeister. He is such a bright artist who made name by doing work hard. I hope his art will drive your attention for sure.